This excursion will take four hours to finish from Katunayake Airport. This is a perfect getaway to enjoy bit of nature & history. Enjoy the unspoiled mangroves, birds around & gullible flying fish next to the boat, which will always bring smile to faces. (updated on : 3 Sep 2020)

With driving, this boating tour will last upto 3 hours.  We will pick you up and drop you off from BI Airport and Negombo area. Muthurajawela marshland and Negombo Lagoon is connected to each other.

About this boating excursion

Price includes : Pick up & drop off / Boat / Tickets / Guide on board / Local snack / All Gov taxes.

things to do & see 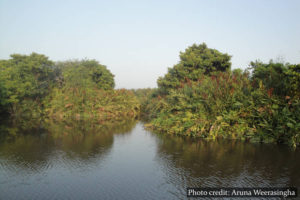 Muthurajawela is the largest saline coastal peat bog in Sri Lanka, located on the west coast between the Negombo lagoon and Kelani river and spreading inland upto Ragama and Peliyagoda in the Gampaha District. The marsh, together with the Negombo lagoon forms an integrated coastal wetland ecosystem (6,232 ha in total extent). The marsh-lagoon complex is estimated to have originated about 5000 years BC.

The study conducted in 2002 by IUCN Sri Lanka has identified 192 species of flora species at Muthurajawela. Vertebrate fauna documented includes 40 species of fish, 14 species of amphibians, 31 species of reptiles, 102 species of birds and 22 species of mammals. Among the total vertebrate species documented, 17 are endemic, while 26 are nationally threatened.

The main water source to the marsh is Dandugan Oya which drains a catchment of 727 km2 and discharges at the interface of the lagoon and the marsh, while the marsh is traversed by a navigational canal constructed during the Dutch colonial period. The area receives an annual average rainfall of 2000-2500mm, while the average annual temperature is 27 C.

According to historical evidence, Muthurajawela was subjected to extensive cultivation of paddy, more than 500 years ago.

Click to read more about flora and fauna of Muthurajawela Marsh here. 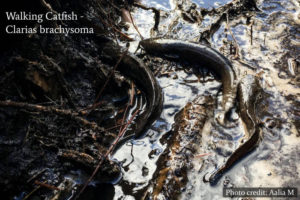 Muthurajawela fish consists about 40 species (5 endemics) belonging to 23 families, representing approximately 45% of Sri Lanka’s native inland fishes. Among them, 5 species are nationally threatened while 4 are exotic.

The Tilapia (Sarotherodon mossambicus), Pearl Spot (Etroplus suratensis) and the Dwarf Panchax (Aplocheilus parvus) are the very common species of fish at Muthurajawela. 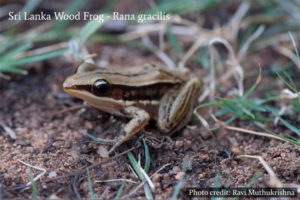 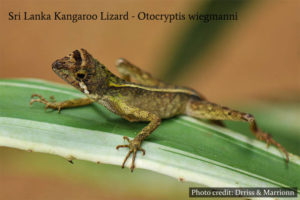 The reptiles consists of 31 species (6 endemics) belonging to 18 families. These includes 15 species of tetrapod reptiles and 16 species of serpents. Among the total species, 9 are nationally threatened. The Water Monitor (Varanus salvator), Common Garden Lizard (Calotes versicolor), and two species of geckos (Hemidactylus frenatus and Gehyra mutilata) were very common reptiles at Muthurajawela.

The occurrence of the Star Tortoise (Geochelone elegans) is of particular interest, as this species is known to occur naturally only in the lowland dry and intermediate zones in the island. A breeding population of the Estuarine Crocodile (Crocodylus porosus), the largest reptile in the Muthurajawela Sanctuary, occurs in the northern area. 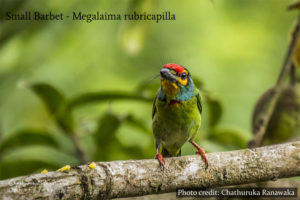 Birds appear to be the dominant group of vertebrates at Muthurajawela, consisting of 102 species (1 endemic) belonging to 42 families. Among the total species were 19 winter migrants, while 3 species are nationally threatened.

About half of the bird species recorded were those associated with wetland ecosystems, such as herons, egrets, cormorants, teals, waders, kingfishers and terns which feed on aquatic organisms. The northern and central parts of the Muthurajawela Sanctuary are an important breeding habitat of native birds. This area, together with the Negombo lagoon, is also a preferred feeding and resting habitat of the winter migrants. 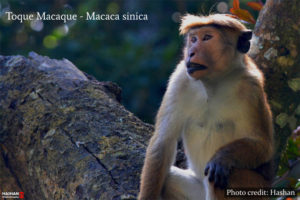 The mammals of Muthurajawela consist of 22 species (1 endemic). The Slender Loris (Loris tardigradus) is an extremely rare primate at Muthurajawela, and it is considered globally threatened species. The marsh is also an important refuge for the carnivorous
Fishing Cat (Prionailurus viverrinus).

One of another endangered mammals species at Muthurajawela is Toque Macaque (Macaca sinica). 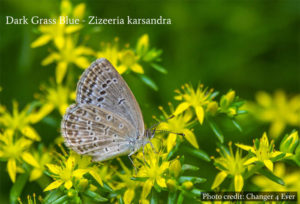 The butterflies recorded consists of 48 species. None of them are endemic, but 6 species are nationally threatened. 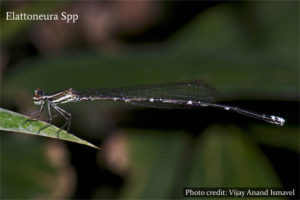 The odonates consists of 22 species. Among them, only one is endemic, while 2 are nationally threatened.

The dragonfly Rhyothemis variegata and the damselfly Agriocnemis pygmaea were abundant.

The northern part of Muthurajawela is Negombo Lagoon.

Negombo Lagoon is one of the most productive estuaries in Sri Lanka.

It is 12 km in length from south to north and 3.75 km at its widest point. The mean depth of the lagoon is about 1.2 m. The greatest recorded water depth is 2.6 m but 10% of the lagoon has a water depth of less than 0.5 m. The lagoon covers an area of approximately 32 km2 and opens to the sea at its northern end. To the south, it is connected to the Muthurajawela marsh which covers an area of approximately 31 km2 and together the lagoon and marsh constitute a conjoined, tidally influenced coastal wetland.

The Canal segment consists of thirteen islands of which Munnakarai is the largest. Four islands are already inhabited and all others are covered with mangroves. Names of the islands are Munnakarai, Siriwardena Pedesa, Wedi Kanda, Maha Moliya, Kakaduwa, Katukarai, Wilisiyanduwa, Kadolgas Nella, Kuda Moliya, Kakaduwa (2), Pittipana Duwa (1), Pittipana Duwa (2) and Kuttiduwa. The lagoon is surrounded by fringe mangroves and mangrove associates. Shallow areas of the lagoon bed are covered by sea grasses and mud whereas the bottom of the lagoon mouth is full of sand.

The abundance of zooplankton in Negombo Lagoon varied from 48-198 individuals l-1. The average wet biomass of zooplankton in the lagoon was 0.5 g m-3. Copepods found to be the most dominant zooplankton group which comprised of 40 % of the zooplankton community of the lagoon. Copepod larvae (nauplius) contributed for 34 % of which 87 % was calanoid copepods (Table 2).. The most dominant calanoid taxa was genus Microcalanus which contribute 13 % to the zooplankton community in the lagoon. Zooplankton abundance in the inlet canals to the lagoon was estimated and found the highest abundance of 145 individuals l-1 in the Hamilton canal and the lowest was found for the Dandugan Oya (Table. 3). The copepods are the dominant forms of the estuarine plankton that constitute to the secondary production in the M environments which is the fundamental step in the estuarine food web.

The flora and fauna found on the bottom, or in the bottom sediments, of a sea or lake (benthos)

Samarakoon and Raphael (1972) surveyed to find the seed availability in the Negombo lagoon and found that the post-larvae and juveniles of Penaeus indicus, P. semisulcatus, Metpenaeus dobsoni and M. elegans in sufficiently large numbers during the period of September to November, whilst P. monodon and P. latisulcatus were recorded in smaller numbers for a short period.

The grapsid and ocypodid crabs have been abundant in the mangrove areas and on mud flats of the Negombo Lagoon respectively. The most dominant species of grapsid crabs are C. indiarum, and C. darwinensis. The first record of Metopograpsus thukuhar and Sesarma guttatum in Sri Lanka were recorded in mangroves in the Negombo Lagoon (Priyadarshani et al. 2008). Xanthid crabs, especially Baruna socialis and Pseidognathus dearira have been observed to occur in association with the oysters in the Negombo Lagoon (Pinto and Wignarajah, 1980). The mud lobster, Thalassina anomala inhabits inside the mangrove stands. Among the other crabs that inhabit this estuarine environment are hermit crabs belong to genus Eupagurus and genus Paqurus and fiddler crabs (Uca sp).

Show your support to local issues