This excursion will take four hours to finish from Katunayake Airport to Henarathgoda Botanical Garden. Visit the garden, listen to the history of rubber planting in Sri Lanka & Che Guevara’s relation to this park. (updated on : 3 Sep 2020)

About this garden visit

Things to do & see 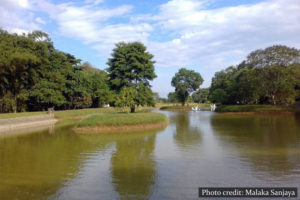 Henarathgoda Botanical Garden is among one of the six botanical gardens in Sri Lanka. It is located in 44 acres of land above 33 ft from the sea level. Paddy fields and Attanagalu Oya border it.

The establishment of this garden is synonyms with experimental planting of first ever rubber tree in Ceylon in 1876 under the British rule.

In 19th century the British naturalists concentrated their trials on Ceylon due to the failure of rubber plantations in India and discovered that Ceylon offers the same environmental condition as that of the Amazon forest. 1919 rubber seeds, collected from the Amazon forest, were imported from the Royal Botanic Gardens in Kew in London and were planted in Henerathgoda gardens. These rubber plants were bloomed for the first time in 1881 and seeds obtained from it were exported to South India, Malaysia, and Myanmar.

Much to this success Che Guevara was in Sri Lanka on 7th August 1959 to study rubber planting techniques as part of his Asian tour. It happened to be that Sri Lanka is one of the few countries he visited in his colorful lifetime.

The first rubber tree was collapsed due to rain storm in 1988 and the remaining have not been preserved.

The newest additions to this botanical gardens include boat rides at the Attanagalu Oya and a bridge over the river.

The garden hosts an extensive collection of palms, orchids and trees endemic to the country. The garden is also home to nearly 80 species of birds including ten endemic species, 18 species of mammals including Sri Lankan flying squirrel and 12 species of butterflies and 10 species of dragonflies.

The garden is divided in to an orchid garden, which hosts a rare specimen of Queen of orchids, forest path, palms garden, the medicinal garden, which houses a collection of trees producing arrow poison from Africa and Malaya and Educational garden and a Japanese garden.

Although the garden is open to the public throughout the year, the best period to visit the botanical garden is following the South-west monsoon season, June to November, which leaves the foliage brimming with vibrancy and in numerable blooms.